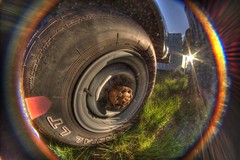 Wind electricity has made huge gains in the last couple of years, and today it remains one of the most cost-effective of all the renewable energy technologies. It is an excellent complement to the solar power system. In some parts of the world, when sun is not shining, the wind usually blows. Wind power is useful in the winter weather to capture both the strong and gentle mountain winds during the times of slightest sunlight and it simply fills in the gaps left by solar power. Why wind electricity? Wind energy is abundant and limitless. It is present in the four hemisphere on Earth. According to Home Power Magazine, wind electricity is created through rotating blades convert the wind kinetic energy into rotational momentum in a shaft. The rotating shaft turns an alternator, which makes electricity. This electricity is transmitted through wiring down the tower to its end use.

What are the benefits of using the wind electricity? Wind electricity helps us fighting climate change. We know already what happen to the world today. There is a sudden shift of changes in the weather. By using wind electricity, it avoids people using harmful pollutants that cause climate change. It does not produce ill effects in the environment. It reduces carbon monoxide and sulfur dioxide emissions. Second, wind electricity is cheaper. Wind energy does not deplete natural resources. Wind is renewed every day as the earth heats and cools. It is more efficient compared to the conventional electricity using fossilized fuels. Engineers have design wind turbines that produced more electricity making it the cheapest form of renewable energy.

Third, according to study, wind electricity is gaining popularity because it is known for its cleanliness and it is known for its industrial safety. No accidents happen for people working in the wind industry. No one have ever been killed by a wind turbine. Fourth, conventional electricity requires hectares of lands to acquire the fuel such as mining, making pipelines, and building gigantic power plants just to generate electricity. But wind power uses only less land and turbines make up less space than the average power station. Windmills only have to occupy a few square meters for its base; this allows the land around the turbine to be used for many purposes, for example for farming.

The downside for the wind electricity is the noise pollution of the turbines. According to people who lives near the wind farm expresses that commercial wind turbines is compared to a noisy engine. Protests and petitions usually brazen out any proposed wind farm development. People feel the countryside should be left in untouched for everyone to enjoy its beauty.

A world without DNA and black holes: The state of science the last time the Chicago Cubs won the World Series
Video: Assassin bugs ambush spiders in their own webs
Comment