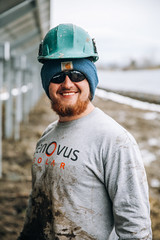 Solar energy is the energy provided by the sun through his radiation and that is disseminated, directly or so diffuse, in the atmosphere.

On Earth, home of humankind and the third planet in the solar system, it is the source of water and wind. The plant on which the animal kingdom, also uses the energy transforming it into chemical energy through photosynthesis. With the exception of nuclear energy, geothermal energy and tidal energy (from the movement of water created by the tide), It is the source of all energy on Earth.

Through various processes, solar power can be transformed into another useful form of energy for human activity in heat into electrical energy or biomass. Hence the term “solar energy” is often used to describe electricity or heat produced from it.

Techniques to directly capture a part of this energy are available and are being improved continuously. One can distinguish three types of energies:

* Solar photovoltaic: This refers to electricity produced by converting a portion of solar radiation with a photocell (which is an electronic component, exposed to light (photons), generates a voltage). Several cells are connected in a solar photovoltaic module. And then, more modules are grouped to form a solar system for individual use or a solar photovoltaic power plant, which supplies an electrical distribution network. The term “photovoltaic” refers to the physical phenomenon – the photovoltaic effect – or the related technology.

* Solar thermal is to use heat from solar radiation. It comes in different forms: thermodynamic solar power, hot water and heating, cooling, solar cookers and dryers. Solar energy is a thermodynamic technique that uses solar energy to generate electricity.

* Passive Solar Power: The oldest use of solar power is to benefit the direct input of solar radiation and is called passive solar Power. For a building that benefits from good sunlight, it must take into account the solar energy in the architectural design: double facades, orientation towards the south and glass surfaces, among others. The thermal insulation plays an important role to optimize the proportion of the available passive solar heating and lighting. A house or a building which will have passive solar energy contributing to a significant saving energy. Batteries, fans, lamps garden pumps. Today, almost everything can run on solar energy. Since many people carry in their bag a GPS equipped with a solar charger and solar photovoltaic panels on some roofs.

Essential for life on Earth, the sun can offer many other services: heating our homes, powering the most remote, and so on.