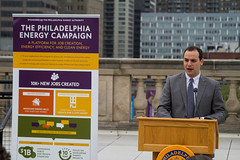 If you truly wish your source of energy to be independent, there are only a few choices: solar in the form of solar electric panels, hot water panels, and passive heating; wind generators for electric production and windmills for water pumping; and hydro electric generators.

A good rule of thumb is that once you eliminate the use of electricity for space heating, water heating, and cooking (electric stoves), most any house can be operated successfully from a solar, wind, or hydro system.

What is a Solar Panel?

Solar panels generate free power from the sun by converting sunlight to electricity with no moving parts, zero emissions, and no maintenance. The solar panel, the first component of a Solar Power System, is a collection of individual silicon cells that generate electricity from sunlight. The photons (light particles) produce an electrical current as they strike the surface of the thin silicon wafers. A single solar cell produces only about 1/2 (.5) of a volt. However, a typical 12 volt panel about 25 inches by 54 inches will contain 36 cells wired in series to produce about 17 volts peak output. If the solar panel can be configured for 24 volt output, there will be 72 cells so the two 12 volt groups of 36 each can be wired in series, usually with a jumper, allowing the solar panel to output 24 volts. When under load (charging batteries for example), this voltage drops to 12 to 14 volts (for a 12 volt configuration) resulting in 75 to 100 watts for a panel of this size.

Monocrystalline solar panels: The most efficient and expensive solar panels are made with Monocrystalline cells. These solar cells use very pure silicon and involve a complicated crystal growth process. Long silicon rods are produced which are cut into slices of .2 to .4 mm thick discs or wafers which are then processed into individual cells that are wired together in the solar panel.

Are you considering installing solar panels for your home?

Solar panels can be a great investment that not only saves you money and increases the value of your property, but also helps the environment while it’s helping your wallet and bank account.

You may probably wondering, commercially made Solar Panels are very expensive. Alternatively, you can build your own solar panel, if you can do some handyman work. Homemade solar panels are a lot cheaper comparing to their commercially made counterparts. Making solar panels really isn’t as complicated as you might think. To build a solar panel you will need some basic materials and a budget of about $ 150-$ 200 per solar panel that you want to build.