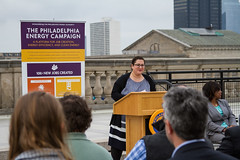 The energy breaks the electrons free, permitting them to flow unrestricted. To make something useful of all these free-floating electrons, the cells use electric or magnetic fields that drive the free electrons to flow like river, creating a current.

By inserting metal contacts at the top and bottom the PV cell, we can extract the current to power something outside the cell, like your calculator. The total wattage (or power) is determined by the extracted current added to the cell’s voltage.

Advances in solar panel technology may actual see the panel itself disappear. The newest and most promising advance is the dye-sensitized solar cell (DSC) technology. Michael Grätzel, a chemist at the Swiss Federal Institute of Technology, pioneered DSC, also called Grätzel cells, in 1991.

DSC lends itself to thin layers of photosensitive film. This transparent, lightweight, flexible and low-cost, sheets or dye film can be applied to the windows of your house or car, even to your sunglasses. The film generates a charge that can be applied to a small battery to power anything, including your phone or MP3 device.

The military even has applications for the DCS technology. The film can be applied to tents to power lights and laptops. In larger applications, it could power entire command centers. It could cover backpacks or be made into wearable solar panels and power a soldier’s electrical devices, eliminating the need for bulky and heavy supplies of batteries.