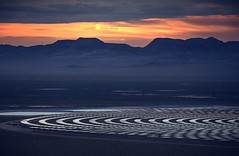 When the electricity, coal, oil and other non-renewable energy sources frequently in an emergency, energy constraints of the international community has increasingly become the bottleneck of economic development, more and more countries have begun to implement “Project Sunshine”, the development of solar energy resources, a new driving force for economic development. Some of Europe’s high level of nuclear research institutions have begun to shift to renewable energy. Great potential in the international PV market, driven by competing countries invested heavily in solar cell manufacturing, to expand production in order to fight place.

China started research on solar cells in 1958, the 20th century, late 80s, China has introduced a number of solar cell production line, the Chinese solar cell production capacity increased from 3 kW at once hundreds of small factories to 4 upgrade Plant 4.5MW, this capacity until 2002, the yield is only about 2MW. After 2002, the European market, especially the German market, the rapid amplification and Wuxi Suntech Power Co., Ltd., turned out to China and the extraordinary development of photovoltaic industry with unprecedented opportunities for development and demonstration effect.

China’s solar cell research 20 years later than abroad, despite the recent 10 years, countries in this area has increased year by year investment, but investment is still not enough, the gap remains large and foreign. The Government should strengthen policy guidance and policy incentives, solar power as soon as possible to resolve issues such as the Internet and reasonable pricing. While the successful experience from abroad, in public facilities, government buildings and other areas to promote use of solar energy mandatory, give full play to the exemplary role of the government to promote the domestic market, starting as soon as possible and healthy development.
Solar photovoltaic power generation in the near future will occupy the important position in world energy consumption, not only to replace part of conventional energy, and will become the world’s main energy supply. By 2030, renewable energy, green energy in the total solar energy will account for 30% of the structure, and solar photovoltaic electricity supply in the world in the proportion of the total will reach over 10%; to 2040, can be Renewable energy will account for more than 50% of energy consumption, solar photovoltaic power generation will account for more than 20%; to the 21st century, renewable energy in the energy structure will account for 80%, and solar power will account for 60% above. These figures demonstrate that the development prospects of solar photovoltaic industry and its important strategic position in the energy sector. It can be seen, the solar cell market prospects