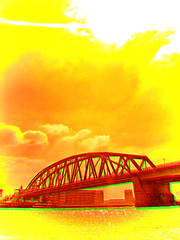 Solar-Powered UAV Under Development
If UAVs starts running on the solar system, then it will save lots of expensive fossil fuel and the add-ons in the form of greenhouse effects. Researchers at the Queensland University of Technology are working on a model of a solar-powered unmanned flight system for round-the-clock surveillance hp pavilion ze4400 battery. They have christened their baby as the Green Falcon. This solar UAV aspires not only to save lives but millions of dollars too by using the most up-to-date green technology. Queensland University of Technology is aiming to make the services of this unmanned air vehicle commercially available within 24 months following successful flight tests.
The Green Falcon is outfitted with a next generation warning system complete with remote sensing and visual data capabilities. Both of these facilities enable this UAV to detect bush fires in Australia that have caused huge damage in terms of lives, money and property. Another possibility is monitoring fires. The university’s aerospace avionics engineer Dr Felipe Gonzalez states, “Bush fires in Australia have killed many people and caused millions of dollars in damage. The Green Falcon is a next-generation warning system with remote sensing and visual data capability.”
The best thing about this UAV is it consumes solar energy during the day and stores it in an onboard lenovo thinkpad x60s battery pack. This battery powers the aircraft after dark. It is also fitted with infrared cameras. These cameras will be handy during search operations in locating distressed people and relay the information to emergency services on the ground. Another advantage of this UAV according to Dr. Gonzalez is “Unlike manned aircraft, which have restricted air time, unmanned aerial vehicles could provide 24 hours surveillance and coverage of disaster areas.”
Green Falcon has a wingspan of 2.5m and weighs 4kg (8.8lb) without a payload. This UAV contains 28 advanced highly efficient monocrystalline solar cells. Green Falcon also boasts of a maximum power point tracker, a purpose-built energy management system and a proficient lithium-ion battery. This UAV also requires minimum maintenance cost. It can be hand-launched for easy operation. Operator on the ground can obtain and react to images and videos sent by the plane.
This UAV can also be utilized for coastal scrutiny, atmospheric and weather research and prediction, environmental, forestry, agricultural, and oceanic monitoring and imaging for the media and real-estate industries. Gonzalez shares his opinion, “The Green Falcon is lightweight, it can be hand-launched and costs are low compared with other UAVs available today.”
The design supports improved swarming capabilities compared with other UAVs, says Gonzalez, which will allow the Green Falcon to provide coverage over large areas in as short a time possible, particularly useful in rescue or fire monitoring missions laptop battery.
The first test flight of the Green Falcon was performed in June. To perform further experiments fund of A $ 50,000-80,000 ($ 45,000-75,000) is needed.