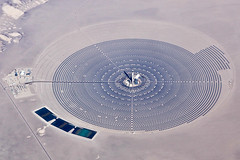 Our solar system is still in its middle age after 4.5 billions of years. It means the solar energy that we can harness is available for next 4.5 billion years. Its a boon to have this abundant source of energy (solar power) but recently many ways were discovered to harness this raw energy. The first satellite which was powered by solar cells was not launched earlier than 1958.

Solar cell or photovoltaic cell is used to convert solar energy into electricity according to the photovoltaic effect, which was explained by the world-famous physicist Albert Einstein in the year 1905. He also received the Noble prize for this discovery in Physics in 1921. Solar cells are arranged in arrays to form solar panels or photovoltaic panels also termed as modules. In these photovoltaic modules, the solar cells are electrically connected and form an encapsulation covering it with a glass sheet which faces the sun. The solar cells are in wafers like structure. It is capable of producing electricity from sunlight. The glass sheet provides protection from the changing climatic conditions like raining, hailing, etc. Solar cells are usually connected in series in PV modules, creating an additive voltage. If the yield of electric current has to be increased, then these cells are connected in parallel. Solar modules are interconnected to create an array with desired peak DC voltage and current. Modules can be interconnected in series or parallel or both.

Semiconductor materials are used to make solar cells. Silicon wafers are commonly used for this purpose. When light touches its surface, some gets reflected and some is absorbed by this semiconductor material. Now extracting this extra energy from the semiconductor is called photo-electric current and it flows through the interconnected cells.

The Copper-Indium Selenide based cell is abbreviated as CIS cell. The modules made by the array of CIS cells are called CIS modules. The elements are selected because of their photovoltaic applications and uses. These semiconductor elements are highly useful in thin film solar cells because of their high optical absorption.

Mike is an Environment expert and has done many researches in Alternative energy. He often writes about renewable sources such as solar panels to create awareness on a source of clean and renewable energy. Being an environment expert, he is always on the lookout for information on the different forms of energy.