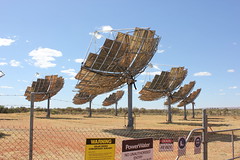 The inevitable consequence of fossil fuels is that they are finite and will run out eventually. At the moment resources like oil and gas are at premium rates. Whether this is being driven by market forces or these resources are genuinely becoming scarce is debatable. What isn’t debatable is that governments and the general population are beginning to feel the pinch of these prices and are looking for alternatives. Solar power and wind energy have been popular ways to create energy for many centuries but have been largely ignored by governments and utilities companies because they were reliant on the elements which, in a word, were unreliable. However for individual properties in the right environments they are useful. They have the added advantage that they are renewable and do not give off greenhouse gases that harm the environment. This article will look at some of the issues around solar power and wind energy.

Solar and wind power are quite straightforward in how they work. Solar power derives its energy from the sun, either passively through direct heating or actively through photovoltaic cells that convert photons to electricity.

Wind energy is derived from the air that is converted to mechanical energy, in the shape of a turbine, that can then be used directly or to create electricity.

Advantages of Solar and Wind Power

There are quite a few advantages to solar and wind power. The energy is free after installation and the equipment requires minimal maintenance. Both methods are pollution-free with no greenhouse gases emitted.

In terms of solar power, little maintenance is needed for the solar panels. A wind turbine does not interfere with the land around it so this can be used for animals to graze or planting of crops. In other words, the land is not totally wasted with the wind power turbines.

Both of these forms of energy creation are reliant on the elements, however further research, especially in solar technology, is making these systems more efficient. Japan and Germany lead the way in solar research and these countries are not noted for long periods of sunshine throughout the year.

Wind power can be quite noisy because of the spinning of the turbine blades. Depending on how big the turbine is, some people may think that the structure is unsightly and ruins the landscape.

With both solar and wind power, a lot of turbines and reflectors are needed to make a significant energy impact for an area. And with solar power, the cells that capture the energy produce DC power which must then be converted to AC power.

With solar power, solar heat and electricity cannot be produced at night or when there is no direct sunlight, so complementary power sources must be used as a contingency. Many people that live off the grid utilize solar power, wind energy and a generator as their energy sources. The generator is the ultimate back up but the solar and wind power can be combined to produce all the households needs provided the house is insulated adequately.

Solar power and wind energy are the way to go in remote areas like farms or countries with under developed utility infrastructures. However it may not be too far away in the towns and cities. This is especially the case of solar panels, that are fairly unobtrusive and have many incentives and rebates to use them.

In recent years the cost of solar power systems have become very affordable and there are a number of incentives to use solar power. Find out about Solar Power Tax Rebates And Residential Solar Power Grants at http://www.solarpowerappliances.com/ The site has features on home solar water heating systems and outdoor garden lighting. Adrian Whittle writes about using solar power and appliances that can utilize renewable energy sources.

Homemade Solar Panels, 10 Useful Tips For Building High Efficiency Panels – The Power is in the Cell
Homemade Solar Energy – Scam, Or a Brilliant Home Energy Solution For You?
Comment