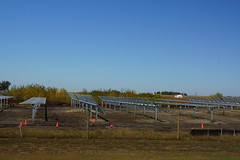 Saving energy is important not only at home, but everywhere. The military, through the Marines, has been experimenting with the idea of using solar energy even in war zones.

The Marine 3rd Battalion, 5th Marine Regiment operating at Forward Operating Base Jackson has been employing a variety of solar equipment to provide energy in the field. Solar blankets are being used to provide continuous charge for radio batteries out on long patrols, solar tarps have been lighting tents after dark, and more traditional solar panels have been powering the command centers and computers.

By employing solar blankets for charging radios the regiment has also discovered an additional, unexpected benefit; they have room for more ammunition when they go out into the field.

They are the first regiment to use only renewable energy to meet their power needs during training exercises, although in the field they still make use of generators. However, their use of renewable sources has decreased their dependence upon fuel for powering generators by nearly 90%. This leads to other safety advantages.

Since the regiment only needs to run its generators for a very short time at night, relying instead on stored power, it makes the base quieter and more difficult for insurgents to find. The base also requires fewer convoys of fuel to be delivered, reducing the risk of attacks and roadside bombings on those personnel.

The experimental base is powered by four separate entities:

1. The Solar Portable Alternative Communication Energy System is a flexible solar panel carried by a soldier to power small devices such as a radio.
2. The Power Shade is a larger tarp that is designed to fit on top of a standard Marine tent and provide energy for the tent’s lighting system.
3. The Ground Renewable Expeditionary Energy Systems consists of a solar panel array that can power up to 4 computers.
4. The ZeroBase Regenerator that directs power in to a large battery capable of powering up to 15 computers and 20 lighting systems simultaneously.

Based on the success to date, it is hoped that solar energy will soon be deployed in other military venues.

Michael Rupkalvis works with the LedBulbsandLights website. The site features a number of different types of environmentally-friendly LED lamps, including the T8 LED tube light and other LED bulbs.