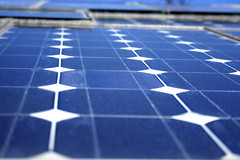 While the last several years have demonstrated the true costs of fossil fuels in no uncertain terms to the American people and the rest of the world, it’s clear that ending the planet’s addiction to oil and coal will require a number of renewable sources.

This is possibly the oldest form of renewable energy. Although popularly associated with the Netherlands, windmills have been used throughout Europe and even in China for hundreds of years. However, in those applications, wind power was used for a specific purpose – namely, milling grain or pumping water. Windmills are a common sight on many North American farms, where they were even used to generate electricity in the days before Franklin Roosevelt’s Rural Electrification Act. Additionally, there was no good way to store unused energy produced by rural windmills and they weren’t terribly efficient.

While some people consider them an eyesore, today’s wind turbines are high-tech and extremely efficient. The Roscoe Wind Farm in Texas has 627 turbines, each of which produces more than a kilowatt of electricity. With a total capacity of over 780 kilowatts, this facility provides enough renewable energy for a quarter-million Texas homes.

Sadly, it is European countries, not the U.S., that are leading wind production these days, with China not far behind.

These have been a bit controversial, namely because corn (maize) was being used to produce ethanol, literally stealing the food out of the mouths of families in developing countries.  Granted, a fair amount of corn that has been genetically modified is probably not fit for human consumption, but there are other, far better alternatives.

One of these potential renewable resources is switchgrass. This hardy weed grows virtually anywhere and everywhere, meaning it can be raised on land that is not suitable for much of anything else. Algae is another source that is showing great potential. Yet another one is hemp, a close relative of the marijuana plant. Unfortunately, coal and oil lobbyists continue to bribe members of Congress to keep all forms of hemp illegal in the U.S.

Nonetheless, the aviation industry and the U.S. Navy are starting to take a hard look at biofuels as an alternative for fueling their aircraft, which may force the government into taking serious action in this direction.

Harnessing ocean tides has already been done in Europe; the 240 megawatt La Rance facility in France has been operating for some time. Unfortunately, the technology used at La Rance is somewhat dated and has some detrimental environmental effects. The newest, most environmentally friendly solution for harnessing this type of renewable energy is the underwater turbine; ultimately, marine-based renewable resources such as these could provide up to 10% of our electricity needs.

In this article Wayne Hemrick writes about renewable resources