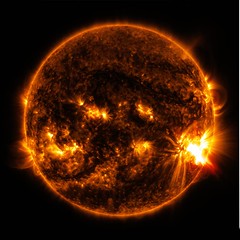 With energy prices rising and a growing awareness of the damage that using fossil fuels may be causing to the environment there is a will to commercialize other forms of power generation. These forms of energy are generically termed renewable energy and include things like wave and wind power. A common form of renewable energy that doesn’t have side effects on the environment is solar power. Solar power has been used for thousands of years but it is only in the last fifty years that photovoltaic (PV) technology has been used to generate electricity. In the early days of this technology, it was simply too inefficient to be considered as a viable alternative to fossil fuels for powering towns and cities. It was also expensive so it ended up being used in remote areas where there was no connection to the grid or for people with plenty of money. Over the years the technology has improved the efficiency and the price has come down. Governments are also encouraging the development and use of solar power by offering tax breaks and grants. It has started people thinking about creating solar energy power stations and providing energy for thousands of people at a time and eventually supporting towns and cities. Indeed some solar power stations already exist and some are in the planning stage that are so grand in ambition and design that they will dwarf many of the biggest structures ever built by mankind. This article will discuss how the solar energy power station works and some power stations that are already operational and some that are planned in the future.

How Does A Solar Energy Power Station Work

The current solar power station consists of a large number of solar reflectors (known as heliostats). They are formed in a circle around a solar tower. The point of the heliostats is to direct the suns energy to the base of the solar tower. This highly concentrated heat rises up the tower and in the process runs turbines or heats up liquid. The turbines are used to create electricity or the liquid is made into steam which can also be used to run electricity generating turbines. The European solar power station currently supports 6000 homes in and around Seville in Spain. The hopes are that it will eventually support the entire city as the number of heliostats is increased. The Australian project aims to supply electricity to 100,000 homes.

Other Considerations Of The Solar Energy Power Station

Obviously the location of the power station is paramount. It has to be located in areas where the sun shines a lot. Southern Spain and outback Australia tick this box but many other areas in the world might not be able to guarantee the sunlight. The size of each structure is huge so there needs to be plenty of space. Again, Spain and Australia have the space but this may not be available in high density living areas like major cities.

The cost of creating a solar energy power station is far more complicated and costly than a traditional power station however the thinking on this cost will change in the near future. As fossil fuels go up in price it will be prudent to have a solar or other form of renewable energy generator in place. People are more receptive to renewable energy production than the other alternative to fossil fuels energy, namely nuclear power.

Solar power can be applied to many house and garden products. In recent years the cost of these appliances have become very affordable and saved money on energy bills. Learn more about solar powered appliances at http://www.solarpowerappliances.com/ The site has features on solar water heating, outdoor lighting and solar air compressors. Adrian Whittle writes about using solar power and appliances that can utilize renewable energy sources.

Doing? Break Into The Property For The Holes To Install Solar Energy
Learning About Information of Solar Energy Before You Buy – Save Your Time and Money
Comment