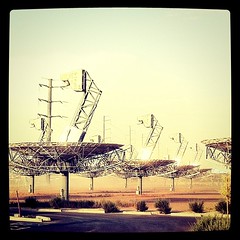 Many people, especially in remote locations, choose to have totally self-sufficient solar power systems. These systems are designed to provide all the energy that is needed 24 hours a day all year round. However, others are able and prefer to stay on the utility grid while using solar power.

With an inverter that produces a pure sine wave as a part of a solar power system, the system can be connected to the utility grid in most cases. This allows consumers to have the backup of utility power instead of dealing with storage batteries.

Being connected to the utility grid helps utility customers who do not want to put a large solar system on their home. It also aids in cases where there simply is not enough sunlight to generate enough power each day.

There are several advantages to being a part of the utility grid. One comes from net metering. This is a program that is offered in many places. It allows utility customers with solar power systems to see profits from their excess energy output.

The way net metering works is simple. Anytime the solar power system produces more energy than is used in the home, consumers get credit for it on their utility bills. In some cases this will never amount to cash rebates, but will always be credits put towards a present or future electric bill. In some cases, however, there will be a catch-up check at the end of the year if you have produced more than you used.

Another important concept for people who use solar power on the grid is time of use (TOU) net metering. This is done by installing special meters which measure the time of power usage from the grid. Since power off the utility grid costs more at peak times and seasons, the meter measures the different peak and non-peak usage.

By knowing when peak periods are – for instance during the heat of the day or during the summer – consumers can try to rely on their solar power during those times. To make up for what cannot be done by solar energy, power chores can be done during off-peak times. For example, water might be cooled for air conditioning ahead of time.

Many people feel that battery storage is important to their systems. In case of a utility power outage, they do not want to go without power to their homes. This is especially true in states that are notorious for having blackouts, such as California. For this reason if for no other, these people do not want to give up their batteries.

There has been some talk of banning the use of solar power systems with battery backup on some utility grids. So far, net metering has triumphed with the use of batteries or without.

Living solar on the grid is not only possible; it is a good option for many people. Some analysts claim that solar power can only advance when people go completely solar. However, converting your electrical system to a mostly solar one is a step in the right direction.

I am a 33 year old Internet Marketing Consultant and Content writer from India.