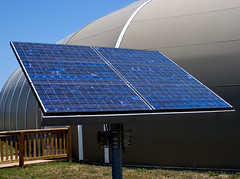 Nowadays, using solar energy is one the latest trends in our society because it helps us not only protect the living environment but also create substitutions for limited natural energy resources. We can see typical examples of solar-powered devices such as lighting systems, heaters fans,  and etc. However, you undoubtedly feel surprised when knowing about the smallest solar-powered cinema in the world called “Sol”.

It was designed by artist Peter O’Connor with the assistance of some of his colleagues from the British art collective Undercurrents. It has only enough space for 8 adults or twelve children. In spite of small scale, Sol cinema still meets audience’s demands with full library of comedies, quirky movies, music videos and short films.

The Sol cinema is situated in Kent, U.K and now preparing for a tour around Europe

It has only one boss and one female staff

The Sol Cinema fully uses 120W solar panels that are connected to four large lithium-ion batteries to provide sufficient energy for the LED projector and all the other electronics inside.

There are hundreds of people coming here everyday, in which children make up the large percentage. Besides, Sol cinema sells its audience popcorn and drinks.

Children are eager and happy to go to Sol cinema

Some children pose photos in front of the cinema

World Cinema – Cinema From Around the Globe

I am an internet marketer and freelance photographer. I maintain various sites and blogs with a large audience. My hobby is collecting photographs of celebrities and writing comments on outstanding events in the field of entertainment.