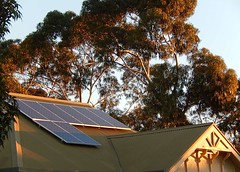 It is now possible to power your favorite gadgets and gizmos using the power of the Sun. Portable solar panels attached to your favorite devices make it easier than ever to power up on the go. But you may be wondering what exactly are portable sun catchers and how are they different than roof mounted solar panels? Learn what they are and if they are right for your lifestyle.

So What Exactly Are These Portable Solar Panels?

Well, you can think of them as little receptors, housed on your favorite gear, waiting to take in the sun’s rays. When the sun’s rays do hit the little cells that make up the panels, they get excited. Like a little kid in the summer, the cells’ think,”The sun is out. Time to play”. These cells are formally known as photovoltaic cells; photovoltaic means using light to get electricity. The cells are made up of silicon(the same material that is used in many electronics, including computers, to conduct electricity). When the sun hits the silicon, electrons break away from the cell and move in one direction towards the metal contacts of the cell. Think of it as a race to see who can light up first. The initial voltage of the cell, in combination with the current(contact) of the electrons, causes power and thus electricity to be created.

With this explanation, you probably see several problems right away with solar panels. How many electrons are released when the sun shines? How many contacts with metal before the cells wear out? Won’t the elements(weather) affect these cells? All great questions and here are the answers. The number of electrons released from each cell depends on a number of factors. The quality of silicon used in the cell, the amount of sun hitting the electrons, and the other materials used in the making of the solar panel all affect the amount of electrons released at any given time. Better design and materials are being used to increase the efficiency of electron movement.

The lifetime of individual cells again depends on materials used and sun exposure. Unfortunately the time period varies so widely that solar panel technology has been hampered by a lack of consistent quality in large scale solar panel farms. Not too worry though, your portable solar panels on your devices will be high quality because there are fewer of them. The elements do affect the cells and that is why they are encased in glass to lessen the effects of rain and wind. Anti-reflective coating helps to mitigate the effects of heat as well.

These portable solar devices use much smaller panels obviously, so they store less than their roof mounted counterparts. But who really wants to carry around a roof panel that usually measures 10 square feet and weighs on average 30 pounds? The portable ones also seem to be able to handle more wear and tear because they are able to be bent and beaten up.

Is Solar Right for You?

Since solar panels rely on the sun, living in a region with constant sunshine is an advantage. There are ways to store solar energy in batteries(these techniques are expensive and outside of the scope of this explanation). Until the cost of storing solar energy goes down, your best bet for living in a minimal sun environment is to get a portable solar powered device. It does not require much energy and you can easily refill it(even with nominal sunlight). So if this solar energy idea sounds good to you, then you will be amazed at what an entire solar panel system can do for your energy needs. Stay tuned for more on that.

James A. Greene is the publisher of portablesolarpanels.info where you can learn everything you need to know about portable solar panels.