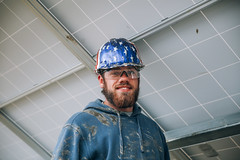 SolarReserve, a U.S. developer of utility-scale solar power projects, announced today that it has received its final Certificates of Environmental Compatibility (CEC) by unanimous decision (5-0) from the Arizona Corporation Commission for its 150 megawatt (MW) Crossroads Solar Energy Project. The approval includes the associated transmission line connecting the project to Arizona Public Serviceâs transmission grid. This final approval follows this past December’s unanimous decision (11-0) from the Arizona Power Plant and Transmission Line Siting Committee to grant the certificates.

“I am excited about this project. I believe this new technology will be very beneficial as we continue to make Arizona the solar capital,” stated Arizona Commissioner Sandra Kennedy in her vote to support the project. “I like the fact that the developers of this project will seek to sell their solar power within Arizona, which I believe is a testament to our Renewable Energy Standard.”

The project will create over 450 construction jobs during the two-year construction period and up to 5,000 direct and induced jobs, including off-site supplier and supporting activities. The project has a capital cost in excess of $ 500 million and is expected to generate economic development in Gila Bend and throughout the region. It will employ at least 45 full-time, permanent operations staff throughout the 30-year project operating life and has an annual operating budget of up to $ 10 million per year, largely spend locally.

Located on privately owned and actively cultivated land west of the Town of Gila Bend in Maricopa County, Arizona, the 150 megawatt Crossroads Solar Energy Project will supply approximately 450,000 megawatt hours annually of reliable, green, zero-emission electricity to Arizona – enough to power up to 100,000 homes during peak electricity periods. The project will utilize an advanced molten salt, power tower technology developed by Pratt & Whitney Rocketdyne, a division of United Technologies Corporation, providing the ability to store 10 hours of solar energy and generate electricity on demand, even after the sun goes down. This energy storage capability provides a stable, predictable electricity product and can replace conventional power generation that produces harmful emissions from burning coal, natural gas and oil.

“The unanimous approval by the Commission illustrates a commitment to bringing viable, utility scale solar thermal projects to Arizona which will contribute to the state meeting its renewable energy goals and peak energy demand with non intermittent, fully dispatchable power,” said Tom Georgis, Vice President of Development for SolarReserve. “The project also represents hundreds of millions of dollars of investment into Arizona and significant, diverse job creation in the construction, operations, manufacturing and supply sectors.”

The American Institute of Renewable Energy (AIRE) is a solar training school fully equipped to prepare the workforce needed to complete and operate SolarReserve’s Crossroads Solar Energy project. Solar photovoltaic training is mandatory in order to complete this ambitious project that will create jobs in Arizona. In order to start-up ones career in the solar energy industry, one should take the initiative to receive a solar installation certification. AIRE also offers free solar training seminars if one wants an introductory course in solar training.