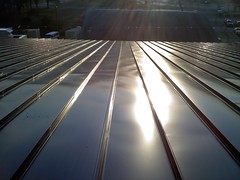 When the radiations from sunlight are tapped and utilized, the process is called harnessing solar energy. In more specific terms, the generation of mechanical power, chemical power and electricity from the sunlight is defined as solar energy. Different alternative techniques of solar energy are used for this conversion purpose. These technologies include solar chimneys, solar thermal tools, water pumps and photovoltaic cells. In this article, we would look at the rather interesting topic of the mechanism of working of solar energy – a topic that has already drawn widespread attention.

How is the enormous power of solar energy generated?

In order to get a proper feel of how solar energy works, the regeneration, way of application and final usage have to be considered in detail. Solar power is widely recognized as the best renewable source of energy. When the electromagnetic waves of the sunlight strike the upper echelons of the earth’s atmosphere, reflection results in almost seventy per cent of these waves sent back into space.

The remaining thirty per cent radiation can be effectively absorbed by the clouds as well as the landmass and water bodies on the earth’s surface. This solar radiation, received direct from the sun forms radiant heat, which, in turn, is tapped and converted to mechanical power, chemical power and electricity. Indeed, almost the entire amount of renewable energy source on the earth’s surface is comprised of solar energy. The specific individual needs, as well as the efficiency with which solar energy sources are used decide upon the way in which solar energy would work. Applications of solar power can be found in varied fields, from urban planning to architecture, and from cooking at home to powering motor vehicles.

How advantageous is the usage of solar power?

The advantages as well as the disadvantages of solar power need to be understood, in order to know how solar power works. Firstly, solar power is free, abundant and a renewable source. This indeed makes it am extremely advantageous source of power. In stark contrast to other conventional fossil fuel sources of energy that release harmful greenhouse gases that contribute to global warming and pollute the atmosphere, solar power is extremely eco-friendly and does not use these gases at all. It can even be used as the source of power on which vehicles and satellites can be operated. There are, however, certain limitations on the power of solar power sources.

Firstly, these solar power plants should only be set up at places where exposure to continuous and strong sunlight is available. Hence, these plants are found only at certain select places. Secondly, a solar power plant at a place that has intermittent sunlight would never be able to produce the targeted outputs. With the high costs of installation, such plants would not remain economically viable either. However, experts are trying to deal with these problems, and we can expect that in not too distant future, almost all homes would have a solar power converter. That would indeed usher in a pollution-free, cleaner environment.

Instead of wondering about the working mechanism of solar power, you should consult a reference manual on the subject. Such a manual would describe how a solar power plant should be set up, at which place would such plants yield the best results and how to get hold of free batteries and other required components at a reasonable price. All the necessary safety measures as well as the details of wiring are also provided in the manual. A prior study of this manual will surely make you ready to install the solar power plant.

Jim Martin is a researcher, inventor, home energy consultant and author of the #1 best-selling e-book, “Earth 4 Electricity- Renewable Energy Made Easy”. Jim has written dozens of home energy related articles and has been featured in ezines and print magazines, as well as on hundreds of websites worldwide.
To Learn More about Jim Martin´s Unique Step By Step Solar and Wind Power System Visit: Solar Power