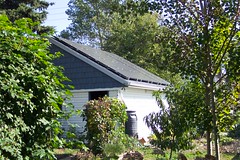 Thousands of people are installing solar panel systems on their homes these days. They are attracted to clean energy for the lower power bills, good feelings, and tax incentives they bring. One of the biggest considerations in installing one of these systems is to consider how you will connect to the grid if you choose to do so. Your solar installer or electrician can help with this, but there are some terms you should be aware of before you get started.

Net metering is a fancy way of saying that your meter can spin backwards. When you install a solar power kit on your home, you can often generate more electricity that you use at times. This is especially true if you are away from home during the day and most of your electronics are off. This is when your system will generate the most energy, since the sun is at its highest and brightest.

Your system, for instance, could be generating one kilowatt, but your home might only be using .25 kilowatts. The meter would spin backwards, and .75 kilowatts would be fed into the grid. In this case the grid is acting as a battery system, essentially storing your energy until you need it. When you use energy, usually at night when the sun is down, your meter will spin forward again.

The bill you receive at the end of the month will be ‘net’ your consumption and your production. Thanks to Federal laws pass in the 70’s, utilities must buy your energy back from you. The only downside is that the rates are often not the same. For instance you may be paying $ .10/kilowatt-hour, while the utility may only pay you $ .06/kilowatt-hour. The lower rate is often called the ‘avoided cost’ or wholesale rate. This means that the utility is buying your power at a reduced rate since it still has to install and maintain the power grid to transport your excess energy to other users.

Time-of-use is something that has come in that past decade or so as the demand for power has risen and the construction of power stations has not been able to keep up. Remember the ‘rolling blackouts’ in California of a few years back? This was due to peak demand, usually occurring during the day when industry consumption and air conditioning are at their peak, outstripping supply. The blackouts would be phased in over areas to avoid a massive grid shutdown for a long periods of time.

This is where solar power comes in. Since solar produces the most energy during the day, this can help the grid meet this supply shortage. And many utilities recognize this fact and will pay you an increased rate for the energy you produce during the day. So if your utility is considering time-of-use charges, you should ask if that means that they will pay, not just charge, an increased rate.

As you probably know, the power grid is an incredibly complex system. The utilities deliver the power to your home at a certain voltage and amperage which maximizes the efficiency of the production and consumption of electricity. So, you can’t just throw up some panels and then plug it into an outlet, hope the power company buys it back, and everything will be fine.

There are very strict rules about what kind of power the utility will take, and the interconnection agreement will define this precisely. Generally you have to turn your solar energy, which is direct current (DC), to alternating current (AC) and match the voltage of the grid. This is all done with the inverter on your solar power kit, but the utility may have certain guidelines about the type and brand of the inverter.

The interconnection agreement will also detail initial and then yearly inspections and the power rates we discussed earlier. Generally it is advisable to talk to your power company very early in the process, thoroughly read the interconnection agreement, and understand what is expected of a grid-tie system. Since your utility may have rebates and incentives for renewable energy anyway, it is a great idea to get them involved from the beginning.

For more information on Solar Panels and Kits, check out our website. Kriss Bergethon is a solar expert and writer. For more of his useful articles on solar power, please visit Solar Panels, Kits, and Systems