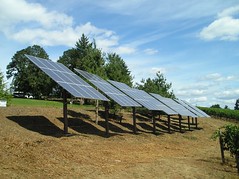 The recent movement toward renewable energy, also known as green energy, has resulted in a number of positives. Green energy helps to keep the environment clean and begins to confront the issue of Climate Change. Perhaps most importantly, green energy technologies will help to move the US toward being a more energy independent nation. Generating electricity using solar, wind and other renewable resources will help Americans power their lives without using resources from other countries.

The current state of our nation’s generation facilities must be addressed if the United States is going to assert its energy independence. Currently, a great deal of residential and industrial electricity is provided by oil-burning power plants. These fossil fuel-driven power plants can be replaced with power stations that produce electricity with green technology. Due to regional differences in climate and geography, these plants will have to make use of a number of different technologies. Electricity can be provided by wind power, hydroelectric, solar and other methods that don’t require raw materials to be imported from other countries.

The United States can’t be energy independent without seriously looking at the transportation sector and how we power our vehicles. The use of gas-powered automobiles must be addressed and more eco-friendly options scrutinized such as hybrid and electric models. Plug-in vehicles are expected to be widely available soon and will draw power from the electricity grid. However, the majority of the power in our electricity grid is currently generated by coal- and oil-based plants, both of which require massive quantities of imported fuel. More environmentally friendly power plants will require less of these imports, allowing the United States to produce its own electricity without involving other countries. Further, as hybrid and electric vehicles increase in popularity, the amount of refined foreign oil that goes directly into our gas tanks will decrease.

When Americans are energy independent, we can worry less about supply disruptions or changing foreign policy to accommodate the needs of resource-rich countries. We can become more proactive in setting our energy policy rather than reacting to the foreign policy decisions of other countries.

Many of these ideas require that the United States change its energy infrastructure. Revamping the infrastructure will result in many more well-paying jobs: a big positive in our challenging economy. Moving toward energy independence will require wind farms, solar panel arrays, hydro-electric facilities, bio-mass digesters, and possibly nuclear facilities to be designed and build. Our national grid will also need to be updated to accommodate these facilities. All of these activities will require a new workforce with diverse skills to complete the task.

Although green energy is already in use across the country, these technologies are still evolving. This provides jobs for researchers, scientists and others who manage to squeeze more electricity and heat out of the sun’s rays or a gentle breeze. Another ancillary benefit is rather than importing raw materials, the United States can export this knowledge, leading the world in applications of green energy, just as we led the world in industrial output in the middle of the twentieth century.

Americans perform at their best when they are united by a common goal. Committing to green energy as part of a comprehensive plan toward energy independence allows us all to come together. Whenever this has happened in the past, there have always been great results, and the switch to clean, renewable energy will be no different. Once the green energy movement has gained some more momentum, progressing on the path to energy independence will be an easier task for us all.

Unfortunately, there are no easy solutions to make the United States energy independent. Making use of green energy is a big step toward the goal, and one that will pay dividends in our bright, clean future.

PageViews works with Dynowatt. Dynowatt has all your Texas electric needs. Electricity in Texas is not just one option. You can have the electric choice you want. For more information about Dynowatt visit http:// www.dynowatt.com.