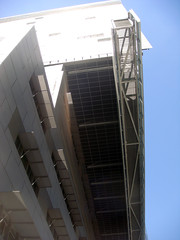 1: crystalline silicon solar cells and flexible solar cells compared
Traditional crystalline silicon solar cells capacity, the conversion of sunlight can reach 20% (laboratory data), up to 17% on industrialization, technology maturity, decay and a series of small advantages! Its shortcomings are obvious: must be enclosed in glass, the weight of large, bulky, portability is not strong, the installation must be considered when the bracket, wind properties, installation and a series of problems.

Light weight, flexible solar cells, and can be folded, curled, or even paste in the other surfaces, such as automotive glass, clothes and so on. Scientists constantly strive to improve its conversion efficiency to enable them to apply early.

2: The history of the development of flexible solar
University of California in 2002 by means of nanotechnology and polymer scientists have developed a flexible solar cells. The battery is like a sandwich, sandwiched between the electrodes on both sides of a few hundred nanometers thick organic film, is one of the most critical CdSe nanorods, nanorods that are subject to specific wavelengths of light can be generated after the electron irradiation hole pairs, resulting in potential difference. This 1.9% of the solar cell can be transformed into electricity.
Netherlands, France and Portugal scientists named in an H-Alpha Solar (H-AS) the development of flexible solar cells work, H-AS solar cell efficiency is about 13%, but low production costs (per watt 1 euro) and the common good can make up for this shortcoming is not too high efficiency. Development staff intends to H-AS solar cell to further increase the efficiency of about 10%. Their products are likely to occur within 3 years.
Sharp Corporation of Japan in 2004 developed a paper-thin solar cells. This new type of solar cells as large as two business cards, 200 microns thick and weighs about 1 gram, power generation capacity of 2.6 watts. Another advantage is its high photoelectric conversion efficiency, reaching 28.5%.

Canon, Tokyo, Japan last year, the company’s researchers invented a new material made by a flexible solar panels. Its characteristics are: resin encapsulated by the amorphous silicon photoelectric conversion layer of tile as the main material in the flexible chassis.
July 2005, Korea Electronics and Telecommunications Research Institute solar cell research group developed the world’s most efficient flexible solar cell prototype. The flexible solar cells is very low cost, but will the performance of solar energy into electricity is the traditional silicon-based solar cells twice. It is reported that the thickness of solar cells is only 0.4 mm.
3: the development of industrialization and flexible solar cells
U.S. Iowa Thin Film solar cell manufacturing companies use technology to produce flexible PowerFilm solar products, this technology allows semiconductor (amorphous silicon) deposited in a durable, such as paper-thin flexible polymer substrate, in order to achieve curly manufacturing process. Iowa Thin Film claims that their products are highly integrated, lightweight and low cost, and believe their technology is “transformational.” Iowa Thin Film PowerFilm, said their products are specifically designed for air and space vehicles, they can reduce the cost of photovoltaic products, only about 10% of the normal level. PowerFilm coating process is based on the thickness of 0.05 mm in the composite film based on the non-crystalline silicon. Various models of solar panel output voltage from 3 V (current of 22 milliamperes) to 15.4 V (current of 100 mA), its price ranges from 3-20 U.S. dollars.
U.S. soft (coiled) thin film photovoltaic cells manufacturer Global Solar Energy has announced that its film production line manufacturing of large area flexible thin film PV module conversion efficiency of 10.7% of the industry’s highest to date. According to reports, the company in February this year, the average efficiency of these components more than 10%. Global Solar Energy announced that to enhance the efficiency of its commercial products, this flexible thin film PV confidence. Global Solar Energy is the world’s first think they have the ability to manufacture military and commercial high efficiency flexible thin film solar materials company.

Global Solar Energy Company of these components are designed power 42.5W, will be used for the U.S. military.
4: Flexible solar package
At present, large and small manufacturers of crystalline silicon solar package hundreds of the family, and still continued an upward trend, mainly because I think one of the solar PV industry is indeed booming, I enter the solar industry in 2003, when the package samples with the quality of products on the market today is quite different, very large bubbles and other bad, but basically are in short supply in the state, the package is about 8 yuan profit. Second: Suntech and other “name brand” products qualify, especially Shi Zhengrong’s overnight success, which greatly stimulated the people who became rich overnight, so the packaging manufacturers are springing up there. I believe that the current profits of crystalline silicon package has been very transparent and competitive the manufacturers, component prices are now in his early twenties manufacturers have reported a watt out of the price.
Amorphous solar cells: the current production of amorphous solar cells manufacturers are: Harbin Keluo La, Tianjin energy, energy, Quanzhou are a number of stone manufacturers, but basically the battery is made of amorphous ITO conductive glass amorphous cells, to the nature of the product can carry the inconvenience!
Flexible solar cells: Currently, flexible solar cells make only one package of the company, and I am fortunate enough to come into contact with the package in the industry, material: cloth, EVA, flexible solar cells, ETFE, cloth to open the window, the silicon package with the EVA to the fabric , the surface of ETFE package to seal the purpose of transparency. Flexible solar panel market:

Because the company is currently involved in the industry is almost empty, and the solar industry market is very broad, especially the flexible solar industry needs, makes it relatively unique in the industry, but also because the characteristics of the product, its market will also be very broad: outdoor camping, Backpack portable, attractive appearance of the street, the military markets. The profit is also now crystal silicon package package several times. It is reported that: U.S. UNI-SOLAR will be built in Tianjin, China’s first flexible solar cell production lines. To the inevitable solution to the current phase of silicon when the outsourcing situation. Suggested that if companies want to enter the solar industry can be considered to enter the flexible solar industry!