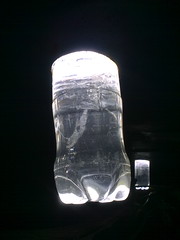 I have an electrical power plant on my roof and you can have one too. The technical term for the plant is Photovoltaics or PV. My system here at my Urban Farm, was installed in April 2006 and originally was designed to offset 40% of my electric bill. I was already conserving and kept my average cost of electricity for my 2,000 square-foot-home and office to $ 1200 per year. That in itself was a significant achievement.

So what was I doing back then to “reduce the use” of electricity? I started to become more efficient by switching to compact fluorescent light bulbs (CFLs), adding ceiling fans in all the rooms and insulating my attic. Then I did two significant things that save a lot of money on my electric bill. First I added an evaporative cooler that works wonders in reducing energy consumption in the desert Southwest until it gets too humid in July. The cooler paid for itself, in saved energy costs, in just over three years. Second I put my electric water heater on a timer so that I only heat water when I need it. According to the sticker on the water heater it costs $ 434 per year to operate it around the clock. I only need to heat water for two hours per day so doing the math I am saving in the neighborhood of $ 375 per year.

Then I took it one step further and added a thermal solar hot water heating system which provides a plethora of hot water. Once it was installed I experimented and was able to turn off my electric water heater altogether in March of ’08 and it did not go back on until December of ’08. Although this takes a little management, the process actually works quite well.

At the time that I chose to install my PV power plant, my finances limited the size of the system I could install. Although PV systems are not cheap, with the energy-saving incentives that are in place, they can be affordable. The 2-kilowatt system on my roof started at $ 15,000. My power company Arizona Public Service (APS) paid for half of it up front so this whittled my part down to a $ 7500 out of pocket cost. Then in 2006 there was $ 2000 in federal tax credits and $ 1000 in state tax credits that I was able to use in 2007 cutting my investment in my PV system to $ 4500. Still that was a lot of money to come up with and I was not in a place to spend any more.

Since that time I have told anyone that was willing to listen, “Stretch as far as you can to put up as much power production on your roof as possible. All the while I was hoping to be able to add an additional two or three kilowatts so I could produce all of my own power.

Then on May 3rd 2008 I had an epiphany of sorts. I received my April 2008 electric bill…the charges from APS for electricity were zero, zip, nada, NOTHING. I have to tell you I was hootin and hollerin with my two friends that were here. There was still $ 8.45 worth of charges on my bill for meter reading, taxes and other sundry items. But in the month of April 2008 I had produced all of the electricity that I consumed – in fact I had even produced a little extra that carried over to May.

This got me thinking, what had I done to accomplish such a feat? Almost unbeknownst to myself I had been readjusting my thinking and electrical-use patterns to use less. I was NOT coming from a place of giving up, doing without or suffering, but from a place of simply rethinking a few things. Interesting. This was not a new concept for me but somehow I had retrained and integrated, becoming more energy efficient into my thinking without a second thought. So what had I done?

The biggest step was to become more conscious about turning off lights and appliances when they are not in use and unplugging energy vampires. Do you remember grabbing the cell phone charger from the wall? Was it hot? That is because it is using electricity even if your phone isn’t charging. These are called energy vampires – how many can you find and unplug? I also switched to using my new solar clothes dryer. Ok so it is just a clothes line but my old clothes dryer sucks a lot of energy. I also have added two tubular skylights – one in my living room and one in the kitchen. These eliminate the need to have lights on in these spaces.

Plus every time I have an opportunity to replace an appliance I make sure that I am aware of the cost of energy to run it. Often there is an EnergyStar® energy saving option available. All this had me ponder…add more solar PV panels or add more efficiency? Interestingly enough they seem to be working toward each other. I may add more PV in the future, but for now I am having a lot of fun seeing if I can get another zero energy bill…all without suffering of course.

Greg Peterson earned his masters degree in Environmental Planning grounded in sustainability studies. Greg is the creator of The Urban Farm, an environmental showcase home and education center in the heart of Phoenix, Arizona http://www.urbanfarm.org, where he has studied sustainable living for more than 20 years. He spends his days running the website http://www.YourGuideToGreen.com, is a writer, teacher, and lecturer on issues of sustainability, a contributing writer for Phoenix Magazine and Edible Phoenix, and Smart Spaces television show co-creator.