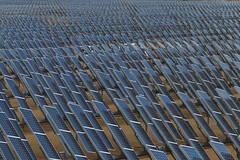 At first, the pressure to get on the solar bandwagon was for environmental purposes, but now the pressure has become financial.

A recent article showed that in South Korea, the country’s biggest firms in the technology arena are falling behind in the global solar power game.

The article said that rival companies in countries such as Japan and Taiwan are leaving South Korea in the dust as they make strides into the world of green energy.

South Korea is trying to make up for lost time. Companies in this country are exploring the world solar cell business. They hope to increase their business in this area two-fold.

The number one cell producer is China. Second is Japan and third is Taiwan.

By ramping up their capacity in this area, South Korea is joining governments around the globe who are either actively investing or at the very least, aggressively exploring how to get onboard green industries that provide alternatives to traditional energy sources.

As a result of South Korea’s move, the company Samsung has pledged a significant investment into solar cell production – some $ 20.6 billion.

In America, we see growth in the solar cell industry every single day. Often it is at a smaller level, either a county, state or a company that is jumping onboard the bandwagon.

The California state energy commission recently agreed to add even more solar fields in the desert in the southern portion of the station.

Some 1,800 acres of solar cells will eventually create enough power and energy to provide electricity for as many as 719,000 homes.

An article about this development states that by approving this project and getting it started by the end of the calendar year, this allows the agency to qualify for federal grants.

The agency also approved smaller complex throughout southern California, which is an area just ripe to reap solar power. A small complex was approved for San Bernardino County and a 1,000-megawatt solar complex was given the green light in Riverside County.

The sun-drenched Southern California deserts are not the only place where solar power is being harnessed. Arizona is a natural location, but even Germany, with its northern climate can be tapped for solar energy.

The technology for solar cells is one of the fastest growing segments of the economy. It is a global phenomenon that is not going to go away. Countries, companies and counties that don’t get on board this trend are going to find they lose money and maybe more in the long run. They may be honed out of the industry all together if they are not seeking green energy alternatives like the other large businesses in the world.

Wal-Mart has long been considered a litmus test for companies and they have taken several steps over the past year to get onboard the green alternative bandwagon. It would be wise for other companies to follow their lead so they aren’t left trying frantically to catch up, or worse, left completely in the dust.

Frank Yocanis has been writing about solar energy for more than a decade. He is an expert on how solar power will enhance our world and our lives.