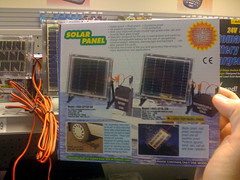 Our research and development of solar cells attached great importance, as early as during the Seventh Five, amorphous silicon semiconductor research work has been included in major national issues; Eighth and Ninth Five-Year period, China’s focus on the research and development of large area solar cells and so on. October 2003, the National Development and Reform Commission, Ministry of Science to develop solar energy resources in the next 5 years development plan, the NDRC “Bright Project” will raise 10.0 billion to promote solar power technology, the 2015 National Solar Power total system capacity of 300 MW.

In 2009, the State Council to provide reports that workers believe polysilicon excess capacity, the actual people are not recognized by the industry, the ministry has indicated that no excess production capacity of polysilicon. At present, the application of solar cells from the military and aerospace fields, into the industrial, commercial , agriculture, telecommunications, home appliances and utilities sectors, in particular, can be dispersed in remote areas, mountains, deserts, islands and rural use, to save cost of expensive transmission lines. But at this stage, it is also very high cost of issuing 1kW power need to invest thousands of dollars, so a large-scale use is still subject to economic constraints.

But in the long run, as the solar cell manufacturing technology and the new light â the invention of power conversion devices, national protection of the environment and the huge demand for renewable and clean energy, solar cells will continue to compare the use of solar radiation practical methods for large-scale use of solar energy the future of mankind to open up broad prospects.