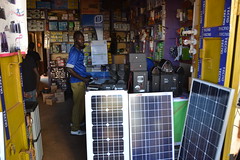 Solar energy in the United States accounts for less than 1% of electricity use. Among the factors that contribute to the lack of interest in Solar energy are the supposedly high costs involved in the installation of solar panels. In the US, California is by far the leading state where solar energy has made inroads. A number of people in California are now designing homes to allow optimum use of light and heat to power their solar panels.

Compare this to the situation in European countries like Germany where government owned development banks give long term low interest loans to people to help them purchase and install solar panels. The excess energy thats produced is required by law to be purchased by electric companies. However things are changing for the better as the federal and several state governments are now offering incentives to homeowners and businesses to put up solar panels on their roof. The government has also encouraged electric companies to buy the excess power. Solar energy in California is a popular choice when compared to conventional energy.

There are several ways to use the suns energy. You could either use concentrating solar power, wherein mirrors are used to reflect and focus the suns rays, providing heat, which in turn powers a generator. Another common method is the use of photovoltaic panels where modules are connected to an inverter that changes the systems DC electricity to AC electricity.

Conserving and preserving conventional energy has become an important agenda in many developed and developing countries. Its very important that the average American understands the importance of using solar energy instead of fossil fuel. The most common myth associated with using solar energy is that these are perceived to be very expensive. While it is accepted that it is a little expensive when compared to conventional energy, manufacturing costs of solar panels in Los Angeles are decreasing. Besides once installed solar power almost costs nothing at all.

Another common misconception associated with solar panels is that these are perceived to be ugly little things that dont compliment your house. Manufacturers have now come up with low profile mounting solar panels in California that are sleek and do not make your roof look hideous. Solar power is believed to generate almost four times the amount of energy used in its production. Besides, there is nothing to worry about air and sound pollution when these solar panels are at work.

With reports that fossil fuels would be depleted within the next 40 years, its important that alternative energy sources are encouraged. Whats required, are subsidies to encourage people to install solar energy in their homes.