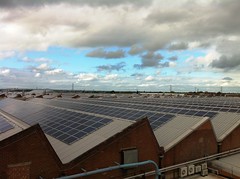 Electricity is one of the defining aspects of modern society. In the past several hundred years, it has brought about more changes to civilization than all the advances in moral theories, medicine, political science, and the like. However, we are on the precipice of danger here. As the power needs of civilization expand as more countries industrialize, we run the risk of running out of fuel sources with which to empower our societies.

Fortunately, we have developed alternative, renewable energy sources that won’t run out, but we need to make the switch before fossil fuels are depleted. Solar power electric systems can provide all the power needs of any business or home, generally providing large savings and becoming an economic boon.

With fossil fuels, we’ve largely hit our plateau with efficiency. Because of the chemistry involved, they will never be able to provide more power or the longevity that we require in gasoline tanks. They are dirty, producing air pollutants and Carbon dioxide, and we are also running out of them. Sooner or later, they will become effectively extinct, and even if we would choose to continue using them, there wouldn’t be any left to use.

Solar power electric systems only rely upon the sun, they produce no pollution, and they are by definition a fiscal incentive for home and business owners alike. Solar power system costs are such that these systems will pay for themselves in about ten years and provide net savings every month after that, all while helping the environment.

Two concerns remain with solar power electric systems. Firstly, they tend to be expensive. The average American home uses anywhere from 9,000 to 10,500 kWh annually. For a 10,000 kWh home, a 4,000 watt solar power electric system would save that home about $ 25,000 over 25 years, or about $ 1,000 a year while lowering power grid electricity consumption by up to 75%. Savings in the winter would be less than in the summer because of the amount of sun that the home receives, in addition to the increased energy needs for heating during those months.

If you are looking at ways to make your home more energy efficient, you should also look into re-insulating your home, purchasing new windows, making sure that there aren’t any leaks, your doors are tight, and that your appliances meet current energy efficiency standards. Replacing a twenty year old fridge, oven, and water heater with new appliances can save additional thousands. However, solar power electric systems are the most cost effective and efficient way to save money and the environment.

If you love this article, you will also love another article written by this article’s author on step down transformer and constant voltage transformer.

Homemade Solar Panel “?” Little Known Ways To Reduce Your Energy Bill
How Does Solar Energy Perform Plus How We Will Be Ready To Gain From Using It
Comment